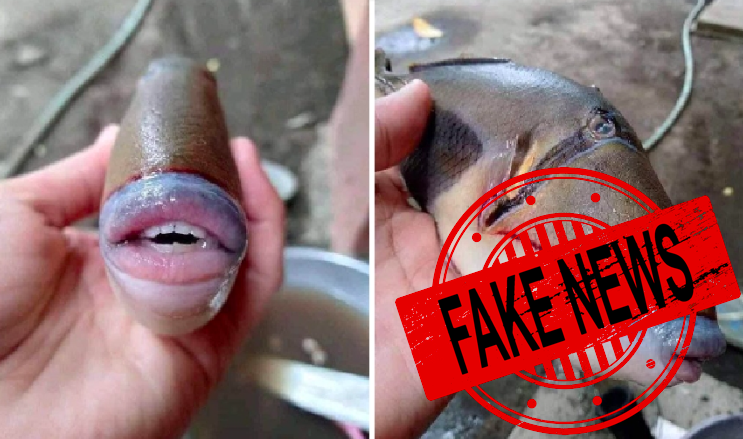 A picture from Malaysia of a triggerfish has been all over the internet since the past few days, ever since a Twitter user by the name of RaffNasir tweeted it, where the fish is seen having human-like plump lips and teeth. The picture was posted on 2 July and received thousands of likes. However, it has now been explicated that the picture is fake.

According to a report by CNET, a marine ecologists statement has clarified that the picture is absolutely fake. David Booth, a marine ecologist at the University of Technology, Sydney said  “The ocean triggerfish on the Great Barrier Reef attacks divers who approach its nest. Their teeth are large but not human-like, so yes the pictures do look fake!”

He confirmed that although these fish have very strong teeth, their teeth are not at all human-like. After this clarification from a connoisseur, it’s evident that someone on the internet has perhaps made humourous use of photoshop to get a triggerfish to look like that.

Fake Video of Communal Violence over Ganesha Idol
Watch out this reality check.
Terrorists or Mock Drill
Watch out this reality check.
The Truth Behind the Attack on Prashant Bhushan
Watch out this reality check.
Nita Ambani’s statement on the Kangana-BMC Controversy
Various Facebook posts have been going around social media, claiming that the …
Schools to Re-open from 21st September? Fake forward
Amid the coronavirus pandemic, social media platforms like Twitter, Facebook, WhatsApp, etc. …
PETA mistreating an elephant??
Not really, you are being misinformed. Watch out this reality check.
Not Worli Sea Link, Not Mumbai Rainfall, See Where’s The Video Is From?
watch out this reality check.
Questions raised on Varanasi being the cleanest – True or False?
An old image of a road dug up and filled with sewage …
Vacancies in the railways? Not quite true. Fake Recruitment Advertisement fools job seekers.
An advertisement seeking 5285 posts in the Indian Railways is making rounds …
Do they really belong to Bihar COVID hospitals?
Are these pictures real? that are flooded these days.. watch out this …
Dr.kafeel khan is in jail or not??
These posts confuse a lot. Check out the reality behind the fake …
Priyanka wadra’s wedding rituals were conducted by a maulvi??
Priyanka wadra's wedding rituals were conducted by a maulvi?? We don't say …
No, she’s not a Muslim doctor
Video gets viral with a claim that a Muslim doctor gets hit …
Fake ‘Public Special Defence Personnel Forum’ Advertisement: No Such Organisation Exists.
A fake advertisement has been doing the rounds on social media with …
Trying to hit Kejriwal with sarcasm, turns out they didn’t do their research
A four-year-old picture of a flooded street from Punjab is being circulated …
Organ Trafficking or a Cremation? fake news spreading like fire amid COVID-19
A number of pictures are being circulated on the internet showing a …
Video of Amitabh Bachan from Nanavati Hospital
A video of actor Amitabh Bachchan acknowledging and appreciating the doctors and …
INDIAN SPYING QUADCOPTER
An old image of an allegedly 'Indian spying quadcopter' is being shared …
FAKE PICTURES OF FLOODED COVID-19 HOSPITAL IN BIHAR
Pictures of flooded hospital wards are going viral on social media, with …
Blog Post Title
What goes into a blog post? Helpful, industry-specific content that: 1) gives …
Total Visitors: 64187