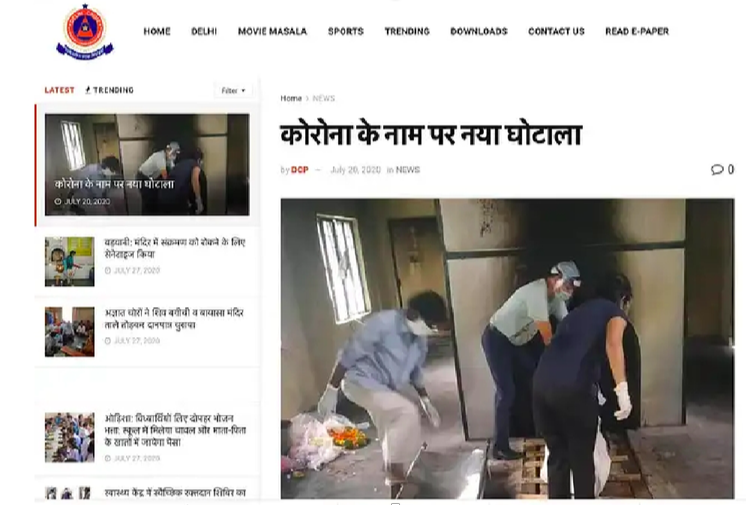 A number of pictures are being circulated on the internet showing a scenario which looks like a cremation in an electric crematorium, accompanied by a claim that the pictures are of an organ trafficking racket that is running during the COVID-19 pandemic, in Maharashtra. The pictures show a lady and two men executing a cremation where one shows the body covered in a sheet, are being shared with the story that there is an organ trafficking racket are carrying out acts amid coronavirus in Maharashtra.

to the viral message, which gives a whole big incident, “There was no case of coronavirus in the Gorai area of Bhayandar. But, in the last few days, a man with mild cough and cold went to a hospital for treatment and was forcibly admitted and told he has tested positive (for COVID-19).” Later in the message it’s added that the man died and that the body was about to be cremated when the family members demanded to see the body, which is when they found out that all the organs were missing” – the Quint. A lot of people have shared the images with the same narrative on Facebook and Twitter.

A reverse image search on the images, the result directed to a website by the name of Delhi Crime Press, which had the photos with the same claim as in the viral posts as a story.

On running a keyword search on Facebook with the keywords ‘human organ trafficking’ and a post was found by a woman belonging to Lucknow, named Versha Verma.

As per Versha’s post, from 21 July, she recognised herself as the woman in the viral images. In her post, she clarified that her pictures were being misused on social media along with a false claim that an organ trafficking racket was active in Maharashtra. And also made it clear that she and her co-worker Deepak Mahajan, cremated unclaimed bodies through their NGO – ‘Ek Koshish Aesi Bhi’.

She also mentioned that they had cremated 17 such unclaimed bodies, as of now, during the lockdown. Turns out that the claim was absolutely untrue, and the pictures are of Lucknow-based NGO workers who cremate unclaimed bodies.

Fake Video of Communal Violence over Ganesha Idol
Watch out this reality check.
Terrorists or Mock Drill
Watch out this reality check.
The Truth Behind the Attack on Prashant Bhushan
Watch out this reality check.
Nita Ambani’s statement on the Kangana-BMC Controversy
Various Facebook posts have been going around social media, claiming that the …
Schools to Re-open from 21st September? Fake forward
Amid the coronavirus pandemic, social media platforms like Twitter, Facebook, WhatsApp, etc. …
PETA mistreating an elephant??
Not really, you are being misinformed. Watch out this reality check.
Not Worli Sea Link, Not Mumbai Rainfall, See Where’s The Video Is From?
watch out this reality check.
Questions raised on Varanasi being the cleanest – True or False?
An old image of a road dug up and filled with sewage …
Vacancies in the railways? Not quite true. Fake Recruitment Advertisement fools job seekers.
An advertisement seeking 5285 posts in the Indian Railways is making rounds …
Do they really belong to Bihar COVID hospitals?
Are these pictures real? that are flooded these days.. watch out this …
Dr.kafeel khan is in jail or not??
These posts confuse a lot. Check out the reality behind the fake …
Priyanka wadra’s wedding rituals were conducted by a maulvi??
Priyanka wadra's wedding rituals were conducted by a maulvi?? We don't say …
No, she’s not a Muslim doctor
Video gets viral with a claim that a Muslim doctor gets hit …
Fake ‘Public Special Defence Personnel Forum’ Advertisement: No Such Organisation Exists.
A fake advertisement has been doing the rounds on social media with …
Trying to hit Kejriwal with sarcasm, turns out they didn’t do their research
A four-year-old picture of a flooded street from Punjab is being circulated …
A Triggerfish picture that triggered the internet
A picture from Malaysia of a triggerfish has been all over the …
Video of Amitabh Bachan from Nanavati Hospital
A video of actor Amitabh Bachchan acknowledging and appreciating the doctors and …
INDIAN SPYING QUADCOPTER
An old image of an allegedly 'Indian spying quadcopter' is being shared …
FAKE PICTURES OF FLOODED COVID-19 HOSPITAL IN BIHAR
Pictures of flooded hospital wards are going viral on social media, with …
Blog Post Title
What goes into a blog post? Helpful, industry-specific content that: 1) gives …
Total Visitors: 64181