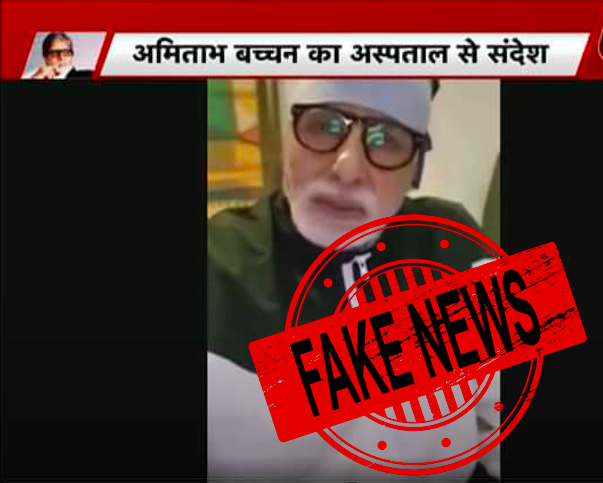 A video of actor Amitabh Bachchan acknowledging and appreciating the doctors and staff of Dr. Balabhai Nanavati Hospital is being extensively circulated on various social media platforms and being shared by numerous news institutions, claiming that it is a recent video of the actor’s visit to the hospital after he tested positive for Coronavirus on Saturday, 11 July 2020.

However, it turns out that the claim is untrue.

In the video, the actor is conveying a thanksgiving message to doctors and the staff for their constant and ceaseless battle against the virus. He said, “I thank the doctors, nurses and staff of Nanavati Hospital for the tremendous work that they are doing in these trying times.”

The video was widely shared by the actor’s fans and followers. Also, various news protals including Aaj Tak and Outlook shared the video claiming that it is a video the actor made after testing positive for COVID-19.

Although on conducting a Google reverse image search. It showed results of the same video being uploaded on YouTube on 24 April 2020 by Bombay Talkies TV’s official YouTube channel. A  tweet dated 23 April by film Journalist Faridoon Shahryar was also found in which he shared the same video with a caption stating: “@SrBachchan inspiring message to all the doctors and nurses who are working tirelessly and fearlessly to save lives.”

A number of news reports from April which carried the video message by the actor were also found.

Undoubtedly, an old video of the actor appreciating the bravery being shown by the frontline workers during the pandemic is being circulated with a claim that it was recorded after he was admitted to the hospital after testing positive for COVID-19.

Fake Video of Communal Violence over Ganesha Idol
Watch out this reality check.
Terrorists or Mock Drill
Watch out this reality check.
The Truth Behind the Attack on Prashant Bhushan
Watch out this reality check.
Nita Ambani’s statement on the Kangana-BMC Controversy
Various Facebook posts have been going around social media, claiming that the …
Schools to Re-open from 21st September? Fake forward
Amid the coronavirus pandemic, social media platforms like Twitter, Facebook, WhatsApp, etc. …
PETA mistreating an elephant??
Not really, you are being misinformed. Watch out this reality check.
Not Worli Sea Link, Not Mumbai Rainfall, See Where’s The Video Is From?
watch out this reality check.
Questions raised on Varanasi being the cleanest – True or False?
An old image of a road dug up and filled with sewage …
Vacancies in the railways? Not quite true. Fake Recruitment Advertisement fools job seekers.
An advertisement seeking 5285 posts in the Indian Railways is making rounds …
Do they really belong to Bihar COVID hospitals?
Are these pictures real? that are flooded these days.. watch out this …
Dr.kafeel khan is in jail or not??
These posts confuse a lot. Check out the reality behind the fake …
Priyanka wadra’s wedding rituals were conducted by a maulvi??
Priyanka wadra's wedding rituals were conducted by a maulvi?? We don't say …
No, she’s not a Muslim doctor
Video gets viral with a claim that a Muslim doctor gets hit …
Fake ‘Public Special Defence Personnel Forum’ Advertisement: No Such Organisation Exists.
A fake advertisement has been doing the rounds on social media with …
Trying to hit Kejriwal with sarcasm, turns out they didn’t do their research
A four-year-old picture of a flooded street from Punjab is being circulated …
Organ Trafficking or a Cremation? fake news spreading like fire amid COVID-19
A number of pictures are being circulated on the internet showing a …
A Triggerfish picture that triggered the internet
A picture from Malaysia of a triggerfish has been all over the …
INDIAN SPYING QUADCOPTER
An old image of an allegedly 'Indian spying quadcopter' is being shared …
FAKE PICTURES OF FLOODED COVID-19 HOSPITAL IN BIHAR
Pictures of flooded hospital wards are going viral on social media, with …
Blog Post Title
What goes into a blog post? Helpful, industry-specific content that: 1) gives …
Total Visitors: 64191